AWS rarely gives us insights about how they manage their data centers, there is no too much information about what kind of hardware they use and how they can scale quickly.

This is because I found the talk AWS re:Invent 2016 called Amazon Global Network Overview really enjoyable.

James Hamilton (Vice President and Distinguished Engineer) gives us an amazing overview of how the magic happens behind AWS datacenters.

With 14 regions across the world.

AWS owns and manages all the fiber connections between regions and as James Hamilton mentions in the talks they don’t trust and depend of any third party provider.

Each region is composed of at least two availability zones but all new Amazon regions are built with at least three AZs and some have as many as five.

AWS Regions and AZs are connected with Metro Fiber.

Each AZ has at least one data center, although some have as many as eight.

Also is misconception to think that AZs are servers hosted in the same datacenter as other AZs but in different racks, actually AZs are independent building separated miles away within a Region. Several AZ’s over 300k servers

Miles away from a distance perspective, close from a latency perspective (1 millisecond)

Inside the data center, AWS runs its own custom-built hardware, including network routers.

AWS runs around 50k to 80k bare metal servers in each datacenter.

If data centers are any larger, then there are only modest gains in efficiency related to its scale. On the other hand, there are negative consequences to building larger data centers: If one fails, it will bring down more capacity compared to if a smaller facility goes down. Keeping data centers in relatively modest sizes costs a little bit more.

Hamilton showed one from Broadcom - that has 78 transistors and can support up to 128 ports of 25Gb Ethernet each.

AWS started relying on the custom hardware NIC (network interface controller) in 2012. This change reduced the overall Latency and offloaded the servers virtualization.

Sending a package to a neighbor server using Virtualization takes milliseconds. The package has to go from the 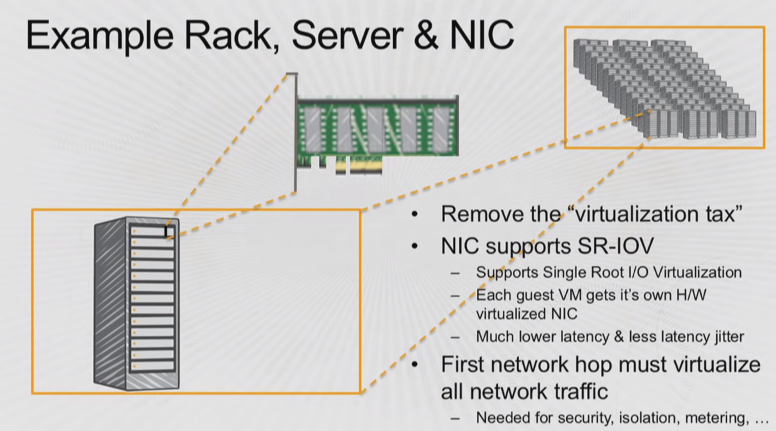