Releasing code updates in a production service with hundreds or even thousands of users using the application and expecting zero downtime is a full-time job for many of us.

Luckily we have many deployment strategies from where we can choose, picking the right one for your project is an important decision that has to be agreed upon with your development team.

This is the most simple way of deployment which consists in fetching the source code from a repository (manually) to the server.

A typical workflow is:

All the steps are manually executed by the developer. The only scenario where this approach makes sense is when a single developer starts building a prototype. In any other case this is not recommended.

Big Bang Deployment (all at once)

This approach is not so different from the previous one because it deploys the application to a single server or multiple ones all at once. There is usually a tool that automates the deployment process but we are still lacking a deployment pipeline. If something goes wrong or a bug is introduced in the application users will experience downtime. Not recommended in a production environment but is a common way of deployment in a development environment where developers need to see code changes fast.

Three servers deployed all at once 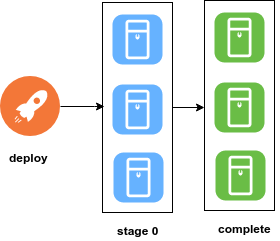 This the default deployment type of Kubernetes because of the versatility to gradually deploy our changes to production. During the deployment the new and old versions coexist without affecting functionality or user experience. This process makes it easier to roll back if something is not quite right.

This is one of the most popular ways to deploy in a production environment. Blue/Green deployment creates a clone from the current environment. Is in the new environment (green) where the new revision of the code is deployed, we can make tests without disturbing the current running environment (blue). Once we are happy with the results we can complete and route the traffic and make the green environment the default while deleting the blue environment. To succeed with this approach we need to rely heavily on automation. 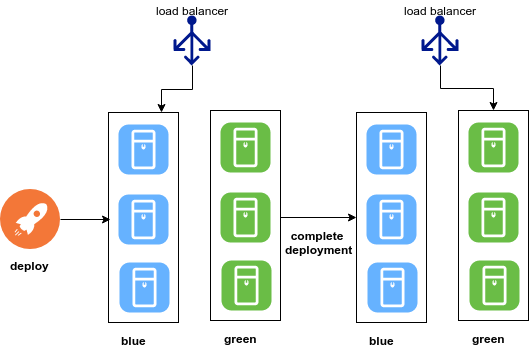 It has the same characteristics of Green/Deployment (cloning) but gradually sends user traffic to the green environment.

All the benefits of Blue/Green plus: 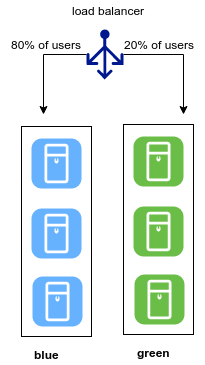