Networking is one of the most complex pieces in Kubernetes, let’s try to summarize pod networking and apply the divide and conquer paradigm.

How Kubernetes does it?

The networking is set up by the System Administrator or by a Container Network Interace (CNI) plugin.

Anyone can develop their own CNI plugin, the only conditions are the ones listed above. 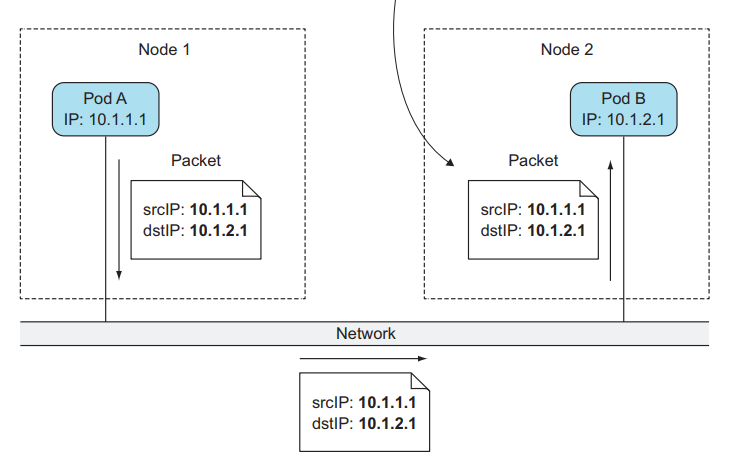 In the image above pod A sends a network package to pod B, the package sent by pod A must reach pod B with source and destination address unchanged.

By doing this, applications running in pods think that they are connected in the same plain network connected to the same network switch.

The only case when the pod source ip is changed is when it communicates with services on the internet, in this case, the source IP is changed to the host worker node IP address.

Even deeper into networking

1. Communication between containers in the same node

The network namespace is set up by the Infrastructure Container (pause container) .

Pods on a node are connected to the same bridge through virtual Ethernet interfaces. If you run ifconfig in a node you will see a vethxxx listed. The interface in the container namespace is renamed to eth0 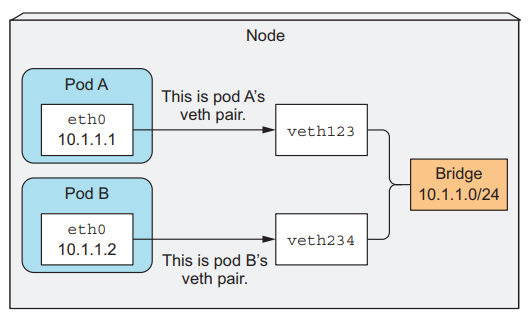 2. Communication between containers in different nodes

To enable communication between containers in different nodes, the birdges on those nodes need to be connected.

The node physical network needs to be connected with the virtual bridge as well.